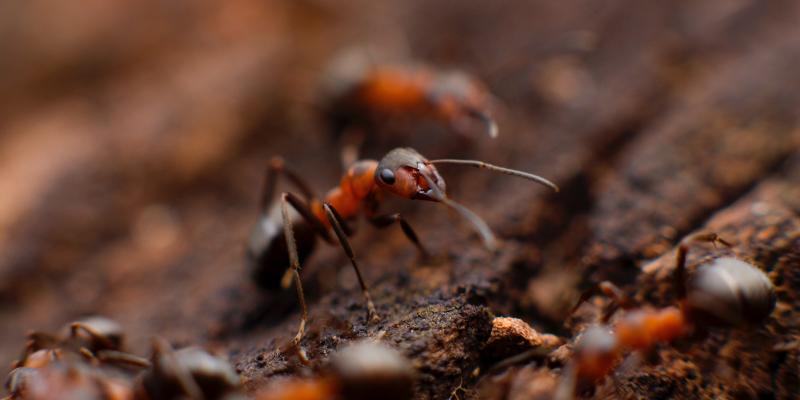 Twice a year, we have an influx of ants during the rainy winter season and the extreme heat of summer. If Argentine ants are your problem, having a semi annual exterior perimeter treatment will usually take care of them. OHAs can be a little more tricky as they nest in wall voids, electrical outlets, attics and other inaccessible areas.

The difference between these ants are Argentine ants are non-native species. They were introduced over a hundred years ago and have spread quite rapidly since. They are a very organized species of ants and you will often find them in organized trails. Their colonies are rather large in number and will compete with other ant species for resources. The OHAs on the other hand are native species of ants, smaller in size, black in color, and have a strong odor when you crush them. Ants like to nest outdoors in trees or at the base of bushes where they have an easy supply of food and water. They come inside during the winter when it is very cold and rainy. This is because their nests get flooded and they are looking for drier areas. During the summer in the extreme heat they come inside as well because water is scarce so people tend to see them in bathrooms and kitchens trying to get to a water supply.

Control of these two ant species varies. Baits on the interior in areas where the ants are present work great for OHAs, whereas I find spot treating baseboards for Argentine ants works well. Treating the perimeter with a safe and effective product such as termidor will yield great results. Baiting works better for OHAs since their nests tend to be smaller in size so the bait can effectively get cycled through the colony. Spot treating with a repellant (pyrethroid) works great on Argentine ants as it sends them back outside where they pass through the termidor and track it back to the colonies nest site. Other ants that we often come across in the field are the Carpenter ants (WDO) and Acrobat ants (which also can release an odor when under stress).

How you can minimize and prevent ants in your home? Keep trash tidy, in closed containers, and avoid overfilling them. Store trash cans outside and away from your home. Trim all trees and bushes back away from the house. Give your home a clearance of 2 feet so that you can easily inspect for ants. Ants love plants because the root system provides a great water supply and soften the soil making it easier for them to nest. If you keep a gap between plants and the house you can prevent ants from entering or at least make it harder for them to get in. If you garden, keep your garden on the far side of the yard as it will attract ants by providing food for them.

Getting on a seasonal or scheduled pest control treatment as a preventative measure will greatly reduce the chances of having an ant infestation.

For recommendations for treatments, please

What Our Customers Are Saying

Cristian was great, he walked around the building with me to get an overview of our needs and then did precisely what we needed. He had taken all the Covid-19 precautions. Thank you.